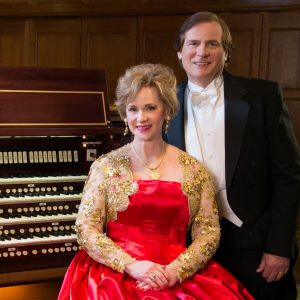 Named "the World's Premiere Duo-Organ Team" by The Atlanta Journal and Constitution,  Elizabeth and Raymond Chenault, duo-organists, have concertized extensively throughout the United States and Europe. Specializing in works written for two performers, the Chenaults have commissioned, arranged and premiered over seventy organ duets, thereby making a significant historical contribution to this slighted area of organ literature.

Mr. and Mrs. Chenault, natives of Virginia, completed their Bachelor of Music degrees from Virginia Commonwealth University studying organ with Lawrence Robinson. Mr. Chenault received his Master of Music degree in organ performance from the Cincinnati College-Conservatory of Music where he and Mrs. Chenault studied organ with Wayne Fisher. Upon graduation, Mr. Chenault became a Fellow in Church Music at Washington Cathedral studying with Dr. Paul Callaway. Other organ teachers include Harold Abmyer, Arthur Poister and John Fenstermaker.

Mr. and Mrs. Chenault are Organists and Choirmasters Emerti of All Saints'. From 1975 until 2018 they directed an extensive music program and concert series. In 2003 they oversaw the installation of and dedicated the Kenan Memorial Organ, Buzzard Op. 29.